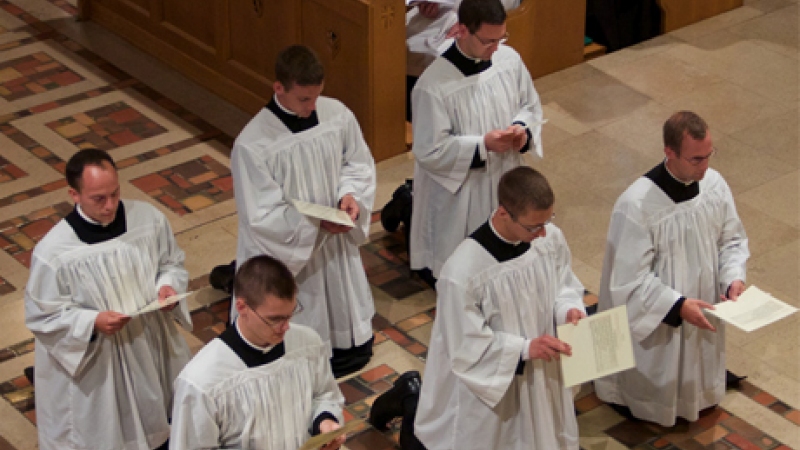 The Brothers of the SSPX are a vital part of the fabric of the fraternal Society. Can you assist the Novitiate with your prayers and support?

“Saint Michael the Archangel, defend us in battle.”

These words, recited by the priest and faithful at the close of every traditional low Mass, petition the Prince of the Heavenly Hosts to come to our aid in the war against sin. At the same time, this mighty prayer reminds us that this battle cannot be won by natural means alone; it requires supernatural assistance. That is, it requires the very assistance God provides us through the sacraments dispensed through His Holy Church.

For nearly half-a-century, the priests and religious of the Society of Saint Pius X (SSPX), in union with the vision of Archbishop Marcel Lefebvre, have sought to assist Catholics all around the world in this great battle by administering God’s supernatural grace from Baptism at birth to Last Rites before the soul passes into eternity. The Society’s clergy wage a constant war against sin; but they are not alone. As I mentioned in a previous letter, the brothers of the Society aid the priests in their work by handling a range of practical duties and even more by their constant prayer, by their edifying example of regularity, and by all their hidden sacrifices. Indeed, Archbishop Lefebvre called the brothers “the angels of our community,” not only because of their valuable services in support of the priests, but also by the holy and humble example they give to all around them.

It is fitting then that these “angels” make their vows on Michaelmas, celebrated on September 29, a feast that both honors Saint Michael and calls to mind God’s final victory over the devil.

The brothers, like angels, are always before God offering their life and actions especially at the holy altar. Their “primary goal and purpose being the glory of God, their own sanctification, and the salvation of souls.” The priests are the mediators between God and man standing between both of them, interceding for man in all their intentions. It is their duty to bring the grace of God to man. The brothers’ vocation is different. Their vocation dispenses them from the care of souls and directs all of their activity towards the direct service of God. The brothers immediately offer to God their entire life: every thought, every work, in order to constantly serve and adore Him. Following the statutes, they therefore take special care for the church and the altar. All they do for the priest, they do seeing and serving Christ in him. Their life is a life of adoration. Hidden from man, but most noticeable for God. By their vows they manifest their determination to have God as the center of their lives. The vows of poverty, chastity and obedience detach them from all that is created, binding them to God without any restriction. Belonging entirely to God, adoring Him at every moment, they are like the angels that “stand around the throne of God and fall down before the throne upon their faces, and adore God” (Apoc. 7:11).

One week prior to making their vows this year, the brothers will make a retreat at the new seminary in Virginia. It is a great joy that this year six young men will enter the brotherhood in the United States and, following a presentation by the brothers at Saint Mary’s earlier this year, several more are exploring a vocation to the brotherhood. Their contribution to the Society’s apostolic work couldn’t come a moment too soon.

The references in the liturgy of this feast display much of what Archbishop Lefebvre intended in the establishing of the religious brothers for the SSPX. In the Mass on the Feast of Saint Michael, we read of the special role of the Angels. In the Gradual they are those “who are mighty in strength, that do His will.”

For most of the faithful who fill the pews of our chapels, the abbreviation “SSPX” is associated solely with the priesthood, but the Society is larger than that. The brothers handle duties ranging from building maintenance to landscaping to accounting. You also see the Society’s brothers serving at the altar during Mass, facilitating retreats and pilgrimages, and tending to indispensable administrative work. Considering how taxed our clergy already are from traveling long distances to serve as many chapels as possible, I am sure you can appreciate the great relief provided by the brothers to the Society’s priests in their fight for the salvation of souls.

And let us not forget how perilous this fight is. As I discussed in my last letter to you, the crisis in the Church and the world at large has resulted in the disturbing normalization of sin. Lamentably, many of the Church’s clergy and religious have abandoned this fight, preferring instead to keep with “the times.” Instead of preaching the Catholic Faith, they choose to preach an ersatz religion that has very little to say about sin but a great deal to say about worldly social issues. Remarkably, even non-Catholics recognize the shift in the Church’s focus from God to man. Consider, for instance, these observations by the Russian Orthodox theologian Fr. Alexander Schmemann upon watching Pope John Paul II’s visit to America in 1979:

“I had the feeling that the main thing was the ‘message.’ This message is, again and again, ‘peace and justice,’ ‘human family,’ ‘social work,’ etc. An opportunity was given, a fantastic chance to tell millions and millions of people about God, to reveal to them that more than anything else they need God! But here, on the contrary, the whole goal, it seemed, consisted in proving that the [Catholic] Church also can speak the jargon of the United Nations.”

Since this was written, the situation has not changed. In fact, it has gotten worse. Without recognizing he needs God above all else, man quickly becomes a slave to his basest desires, preferring what may satisfy him in the moment rather than living his life oriented toward eternity. How different is the life of the religious brother, who voluntarily binds himself to God by his vows of poverty, chastity, and obedience? What a shining example to young men in the world today.

So many young people are lost today, even among the faithful. They need the example of the brothers—their sacrifice, and their prayers. Through the constant sacrifice and prayer of the brothers, and through the sacraments administered by our priests, the SSPX assists the faithful in staying on the narrow path in the hopes that none lose their souls through sin and indifference to the Commandments.

To keep the Society’s apostolic work flourishing, I need your help.

Will you consider a donation?
(Choose "Brothers Novitiate - Fall 2017" in the drop-down menu)

As you may be aware, following the move of Saint Thomas Aquinas Seminary to Virginia last year, the Brothers’ Novitiate assumed the prior seminary facilities in Winona, Minnesota. While the move will greatly facilitate the brothers’ formation, it does not come without costs. The facilities in Winona carry sizable overhead to maintain in addition to the brothers’ work and education.

The expenses for their education and formation are considerable. Your support is indispensable. Your donations help us stay afloat. Please consider a gift of $150, or even $50. Every penny counts!

When prayerfully considering how much you can give, please consider that our apostolic work is carried out for the greater glory of God and the salvation of souls—yours and your loved ones. It is a work that is constantly under fire from the world—a world that is in turmoil because it has forgotten God. Look again to the Prayer to Saint Michael: it is a world beset by evil spirits who prowl about seeking the ruin of souls.

And so, in addition to your financial support, please never forget to petition Saint Michael to protect our priests and brothers from the wiles of the devil. Ask, too, for Our Lady, whose apparitions at Fatima we honor this year, to extend a hand of protection over the Society’s priests and religious so that our work may continue to grow and more souls attain to their final end, which is Heaven.

With appreciation I remain,
Sincerely yours in Christ,